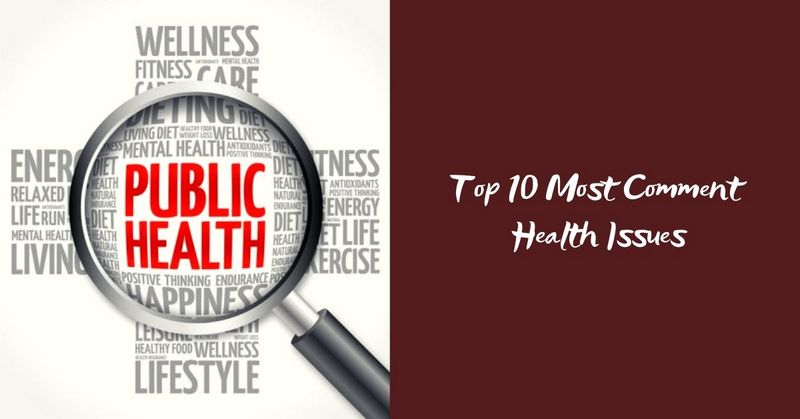 Today, humanity faces a number of health issues. These include outbreaks of vaccine-preventable diseases such as measles and diphtheria, an increase in drug-resistant pathogens, an increase in the prevalence of obesity and inadequate physical activity, the effects of environmental pollution and climate change on public health, and numerous humanitarian disasters.

Trusted Tablets have identified ten health issues that will require attention from WHO and its partners.

Nine out of ten people on Earth are forced to breathe polluted air every day. According to WHO, in 2019, air pollution is an environmental factor that poses the greatest risk to human health. Microscopic particles polluting the air can penetrate the respiratory and circulatory systems and lead to disruption of the lungs, heart, and brain. An estimated 7 million people die prematurely each year from diseases caused by air pollution (including cancer, stroke, heart disease, and lung disease). Approximately 90% of these deaths occur in low- and middle-income countries, which are characterized by high emissions of pollutants in industry, the transport sector and agriculture, as well as a result of the use of non-environmentally friendly kitchen stoves and household fuels.

The main cause of air pollution (burning fossil fuels) is also one of the main factors of climate change, which in turn has a diverse negative impact on human health. It is predicted that between 2030 and 2050, climate change will lead to 250,000 additional deaths per year (from malnutrition, malaria, diarrhea, and heat stress).

In October 2018, the first WHO Global Conference on Air Pollution and Health was held in Geneva. More than 70 countries and organizations have committed themselves to improving air quality. In September 2019, the UN Climate Summit was held to intensify efforts to combat climate change on a global scale. Even if all countries fulfill their obligations under the Paris Agreement, over the course of the current century, the average temperature on the planet may rise by more than 3° C.

Noncommunicable diseases, such as diabetes, cancer and heart disease, together account for more than 70% of all deaths in the world (41 million deaths). This figure includes 15 million cases of premature death between the ages of 30 and 69. Over 85% of these premature deaths occur in low- and middle-income countries. The increase in the prevalence of such diseases is caused by five main risk factors: tobacco use, inadequate physical activity, harmful use of alcohol, unhealthy diet and air pollution. The same risk factors also aggravate mental health disorders that can develop from an early age: half of all mental illnesses manifest by the age of 14, but in most cases, they are not diagnosed or treated. So, the second most common cause of death among young people aged 15–19 years is suicide.

In addition to many other areas of work, this year WHO will help national governments achieve their global goal of reducing physical inactivity by 15% by 2030, including through the introduction of ACTIVE, a set of recommended activities that aims to increase daily physical activity.

Another flu pandemic is inevitable. The only thing that we do not know is when exactly it will break out and how serious its scale will be. The effectiveness of global protection mechanisms is determined by the effectiveness of the weakest link in any national health emergency response system.

To identify strains with pandemic potential, WHO constantly monitors the circulation of influenza viruses. The global surveillance and response system involves 153 institutions from 114 countries. Each year, WHO makes recommendations on which strains should be included in the seasonal flu vaccine. In the event of a pandemic potential in a new strain, WHO has established a unique partnership with all key actors in order to ensure effective and equitable access to diagnostics, vaccines and antiviral drugs (medicines), especially in developing countries.

More than 1.6 billion people (22% of the global population) live in places where there is no access to basic care due to protracted crises (caused by a combination of factors such as drought, famine, conflict, and population displacement) and poor medical care. There are unstable areas in almost all regions of the world.

The WHO will continue to work to strengthen health systems, increasing their preparedness for detecting and responding to outbreaks of disease, and increasing their ability to provide high-quality health services, including immunization.

The development of antibiotics, antiviral and antimalarial drugs can be attributed to the greatest successes of modern medicine. However, the era of these medicines is drawing to a close. Antimicrobial resistance (i.e. the ability of bacteria, parasites, viruses and fungi to resist the action of these substances) threatens to bring us back to a time when humanity could not easily treat infections such as pneumonia, tuberculosis, gonorrhea and salmonellosis. The inability to prevent infections can seriously complicate surgical interventions and the use of treatment methods such as chemotherapy.

Resistance to anti-tuberculosis drugs is a huge obstacle in the fight against this disease, annually affecting about 10 million people, of which 1.6 million die. In 2017, about 600 thousand patients with tuberculosis showed resistance to rifampicin – the most effective of the first-line drugs – and 82% of these patients were diagnosed with multidrug-resistant tuberculosis.

In 2018, two separate Ebola outbreaks occurred in the Democratic Republic of the Congo, each of which spread to cities with more than a million people. One of the affected provinces is also a zone of intense armed conflict.

This shows how much depends on the conditions under which epidemics of dangerous pathogens such as Ebola erupt because the experience of dealing with outbreaks in rural areas is not applicable to densely populated urban areas and conflict zones.

At a public health emergency preparedness conference in December last year, representatives from the public health, veterinary, transportation and tourism sectors discussed the growing challenges of fighting disease outbreaks and urban emergencies. They called on the WHO and its partners to declare 2019 “the Year of Health Emergency Preparedness.”

A WHO research and development plan provides a list of diseases and pathogens that could trigger a public health emergency but for which there are no effective treatments or vaccines. This list of priority areas of research and development includes the Ebola virus, a number of other hemorrhagic fevers, Zika and Nipah viruses, Middle East respiratory syndrome coronavirus (MERS-CoV), severe acute respiratory syndrome (SARS), and also “X disease”, etc. e. conditional unknown pathogen that can cause a serious epidemic and for which it is necessary to prepare.

Primary health care facilities are usually the first point of contact between the population and the health system and, where possible, should provide comprehensive and affordable community-based care throughout their lives.

These facilities can meet most of the medical needs that people experience throughout their lives. Health systems that have established good primary health care services are essential for achieving universal health coverage.

However, in many countries, there is no proper system of such institutions. In low- and middle-income countries, this may be due to a lack of resources, but the reason may be that in the past decades, the emphasis has been placed on programs to combat individual diseases. In October 2018, the WHO was one of the organizers of a major world conference in Astana (Kazakhstan), during which all countries again pledged to strengthen primary health care systems, as provided for in the 1978 Declaration of Alma-Ata.

In 2019, the WHO, and its partners restored and strengthened primary health care in countries and oversee the implementation of specific commitments enshrined in the Astana Declaration.

The reluctance of people to take part in vaccination is dangerous because it can reverse the progress that has been made in the fight against vaccine-preventable diseases. Vaccination is one of the most cost-effective ways to prevent disease: it currently prevents 2–3 million deaths annually, and if global vaccine coverage were reached, another 1.5 million deaths could be avoided.

The refusal of people to be vaccinated is associated with a whole range of reasons: the WHO vaccine advisory group considers carelessness, distrust of vaccines and lack of convenient access to vaccination services as the main factors. Health professionals are the most influential advisers that influence people’s decisions on vaccination, especially within small communities, and the WHO helps them provide reliable information about vaccines.

In 2019, the Organization efforted to eliminate cervical cancer by expanding its coverage of HPV vaccines. Next your, there will be a chance to completely stop the transmission of wild poliovirus in Afghanistan and Pakistan. Last year, less than 30 cases of polio were reported in both countries. The WHO and partners consider it one of their most important tasks to support these countries to ensure that every child is vaccinated and that this crippling disease is completely eradicated.

For more than a decade, dengue has been one of the growing threats. The disease is transmitted by mosquitoes, causes flu-like symptoms and in 20% of cases a severe form of the disease results in death. High incidence is observed during the rainy season in countries such as Bangladesh and India. Today, the duration of this period of increased incidence in these countries is noticeably lengthening (for example, in 2018 Bangladesh recorded the highest number of deaths in almost the last two decades), and the disease is already spreading to countries with less tropical and more temperate climates (such as Nepal), in which it was not traditionally observed.

An estimated 40% of the world’s population is at risk of dengue fever, and about 390 million people become infected with it every year. The dengue strategy developed by the WHO aims to reduce mortality by 50% by 2020.

However, the epidemic is not declining, and almost a million people die from HIV / AIDS each year. Since the start of the epidemic, nearly 70 million people have been infected with the virus and about 35 million people have died. Today, approximately 37 million people are living with HIV in the world. The coverage of sex workers, prisoners, men who have sex with men, and transgender people are of great difficulty. These groups are often denied access to health services. Infected girls and women aged 15-24 account for a quarter of all infections in sub-Saharan Africa, although they make up only 10% of the population.

This year, the WHO will assist countries in introducing self-testing tools to ensure that people living with HIV have the opportunity to find out about their HIV status and seek treatment (and if they are negative, they will ask for preventive care). One of the areas of this activity will be recommendations of the WHO and the International Labor Organization, published in December 2018, on providing enterprises and organizations with support to disseminate HIV tests among their employees.